Combat Nuns All Or Nothing 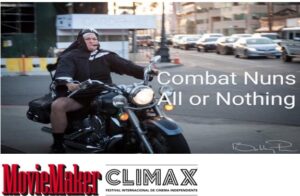 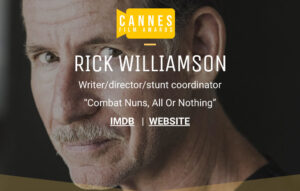 The Climax Critics Awards (or "Climax Awards") based out of Madrid, Spain, machines a rare and exclusive encounter with global cinema; one that sees its selected film titles and alternative new media become something much bigger than themselves by interacting with each other through this ambitious art vexhibition's many virtual "film rooms" (film blocks).

COMBAT NUNS: All Or Nothing (USA) · Rick Williamson

Here it is, the punk comedy of the year starring the talented Dot-Marie Jones and directed by Rick Williamson. He offers us a picturesque short film with black humor reminiscent of the unmistakable style of Bud Spencer and Terence Hill. This is a delirious short film where you can't stop laughing from beginning to end, thanks to the impeccable mise-en-scène established by its experienced director.

Combat Nuns also has a great production design that elevates the film to another level, but what undoubtedly stands out is its rogue sense of humor that, thanks to the creation of an iconic character like Sister Brickball, its director manages to achieve something that is not easy to leave us wanting more. It's one of those short films that leave you wanting more, to know more, to meet our protagonist in other scenarios, and that is undoubtedly the most outstanding merit of Williamson, who not only manages to make us have a good time watching his film but also creates an iconic character that we hope to see again soon. In the meantime, don't hesitate to give the hilarious comedy of the year a chance; your smile will thank you.